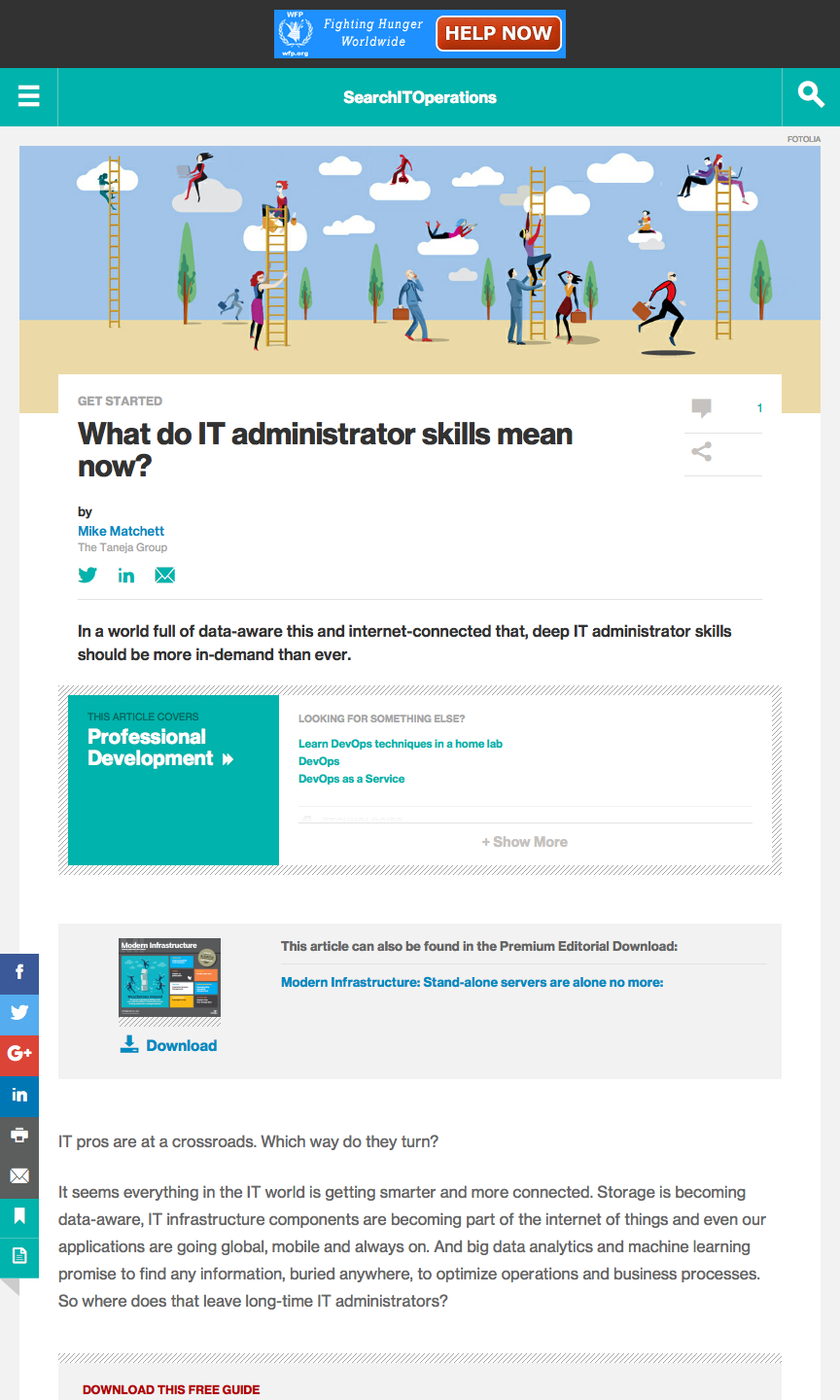 An IT industry analyst article published by SearchIToperations.

In a world full of data-aware this and internet-connected that, deep IT administrator skills should be more in-demand than ever.

It seems everything in the IT world is getting smarter and more connected. Storage is becoming data-aware, IT infrastructure components are becoming part of the internet of things and even our applications are going global, mobile and always on. And big data analytics and machine learning promise to find any information, buried anywhere, to optimize operations and business processes. So where does that leave long-time IT administrators?

The hot trend of DevOps was just an early warning sign that IT is no longer going to be made up of backroom, silo-focused, shell-scripting admin jobs. DevOps is great because having someone versed deeply in the application as much as in the production infrastructure hosting it avoids many of the problems that occur when IT folks are thrown some black box code over the wall and told to just make it run well at scale. But as we’ve seen, native DevOps folks that can dig into application code as easily as they troubleshoot, re-balance, and even capacity plan production systems are quite rare.

It’s common to see DevOps folks coming from the application side when infrastructure is easily and simply cloud provisioned — hence the ready interest in containerized applications. But when it isn’t, especially if hybrid architectures are involved, IT experts might become better DevOps masters in the long run.

I suspect many IT experts consider that kind of move to be somewhat of a downgrade. Perhaps it should instead be seen as moving closer to providing direct business value. Personally, I love hacking code, building accurate capacity planning models, tuning production performance and yes, even troubleshooting arcane and exotic problems. But as I’ve often told anyone who doesn’t know the true depth of IT administrator skills — usually at cocktail parties when it comes out that I do something in technology — “I AM NOT [JUST] A PROGRAMMER!” (This is usually followed by everyone within earshot beating a hasty retreat. I’m really a lot of fun at parties!)

IT specialists also need to broaden into — or be replaced by — IT generalists. Here we can blame virtualization and, to some extent, infrastructure convergence. There are an awful lot more virtual admins out there than 10 years ago. Virtual environment administration isn’t actually easy, but a big value when virtualizing infrastructure is to lower operational expenditures by making it easier to administer: more automatic sharing, simpler point-and-click operations, scalable policy-based management and plug-and-play integration. I often hear from virtual admins that their IT administrator skills are still challenged daily, simply with keeping the lights on and ensuring things are running smoothly, but they are relying more and more on built-in lower-level intelligence and automation. This frees up some time to take a bigger-picture view and operate at a wider span of control. Still, the trend toward IT generalists often disenfranchises the IT silo expert whose cheese gets virtualized or converged.

The role of the IT administrator will definitely need to change as data centers hybridize across multiple types of private and public clouds, stacks of infrastructure converge and hyper-converge, and systems management develops sentience. Of course, change is inevitable. But how can old-school IT administrators stay current and continue providing mastery-level value to their organizations? …(read the complete as-published article there)

Video interview - Krishna and I talk about handling and managing data in clouds - twitter.com/TruthinIT/stat…