Converged Infrastructure, or ‘Where Did All the Silos Go?’

Converged Infrastructure, or ‘Where Did All the Silos Go?’ 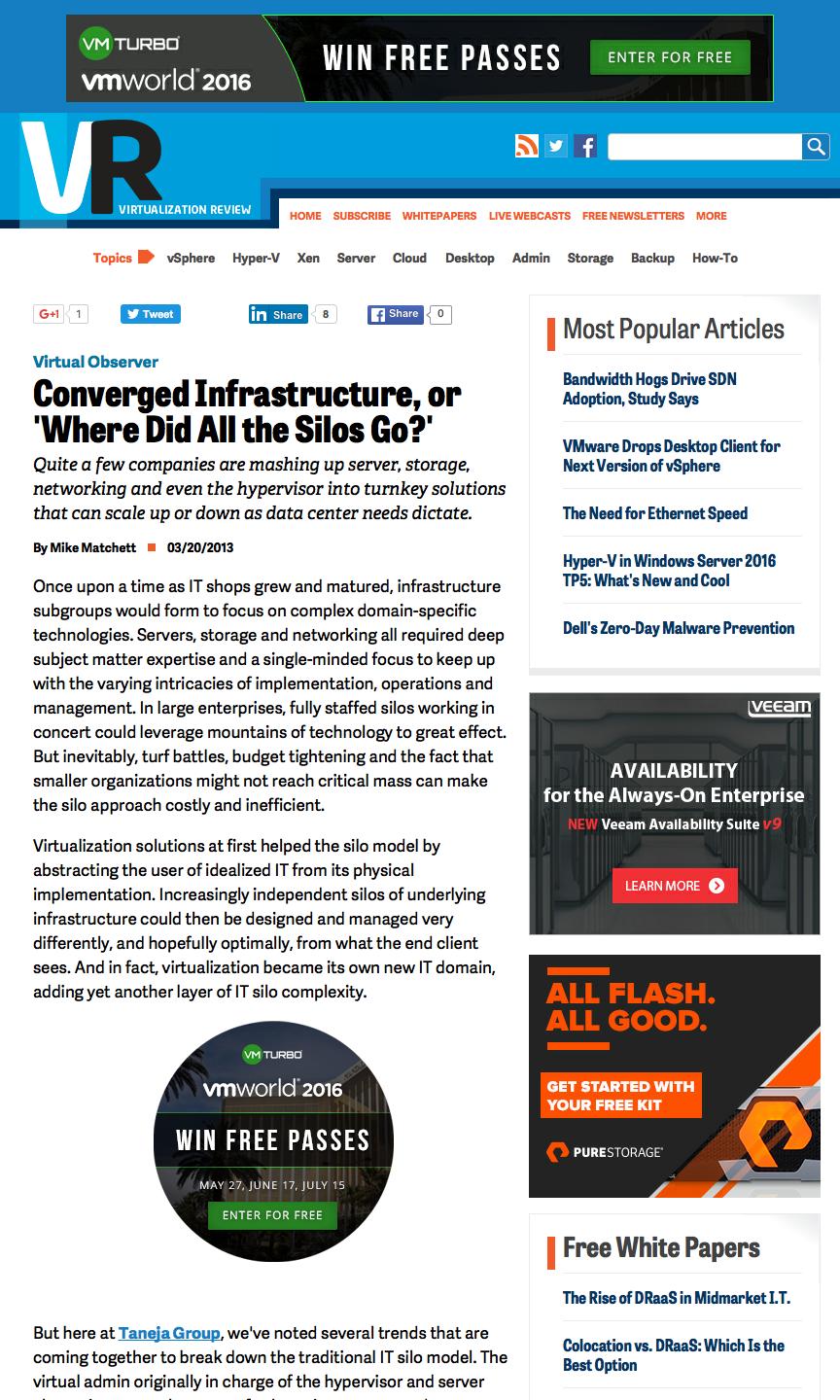 Quite a few companies are mashing up server, storage, networking and even the hypervisor into turnkey solutions that can scale up or down as data center needs dictate.

Once upon a time as IT shops grew and matured, infrastructure subgroups would form to focus on complex domain-specific technologies. Servers, storage and networking all required deep subject matter expertise and a single-minded focus to keep up with the varying intricacies of implementation, operations and management. In large enterprises, fully staffed silos working in concert could leverage mountains of technology to great effect. But inevitably, turf battles, budget tightening and the fact that smaller organizations might not reach critical mass can make the silo approach costly and inefficient.

Virtualization solutions at first helped the silo model by abstracting the user of idealized IT from its physical implementation. Increasingly independent silos of underlying infrastructure could then be designed and managed very differently, and hopefully optimally, from what the end client sees. And in fact, virtualization became its own new IT domain, adding yet another layer of IT silo complexity.

But here at Taneja Group, we’ve noted several trends that are coming together to break down the traditional IT silo model. The virtual admin originally in charge of the hypervisor and server cluster is now on the verge of subsuming storage and networking too. New generations of “software defined” and cloud-provisionable technologies enable virtual admins to dynamically allocate increasingly enterprise-class resources to clients. And on the infrastructure side, converged infrastructure solutions make the physical implementation as simple as snapping Lego-like building blocks together.

For a while there have been bundled solutions that pre-package infrastructure into nice racks. Buying IT in pallets can be attractive in many growth or transformation scenarios, but at the end of the day they are still composed of racks of traditional enterprise infrastructure. In most cases, these solutions are adopted by customers that probably have the silo expertise to build their own, but are looking for a cost-effective shortcut.

What we are really excited about are the new “hyper-converged” infrastructure solutions that are designed from the ground up as scale-out units of IT. Server, storage, networking, and even the hypervisor may have been integrated as a single racked unit. Deployment and growth are simply handled by racking and stacking more identical (or similar as needed) units. They plug together and re-pool storage, cluster the servers and share key resources like flash. IT no longer needs deep silo staffing to deploy and operate enterprise quality solutions.