Be sure to take advantage of these storage industry trends. 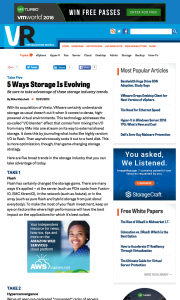 With its acquisition of Virsto, VMware certainly understands storage as usual doesn’t cut it when it comes to dense, high-powered virtual environments. This technology addresses the so-called “I/O blender” effect that comes from mixing the I/O from many VMs into one stream on its way to external shared storage. It does this by journaling what looks like highly random I/O to flash. Then asynchronously sorts it out to a hard disk. This is more optimization, though, than game-changing storage strategy.

Here are five broad trends in the storage industry that you can take advantage of today.

…
…(read the complete as-published article there)