A serverless architecture could live in your data center

A serverless architecture could live in your data center 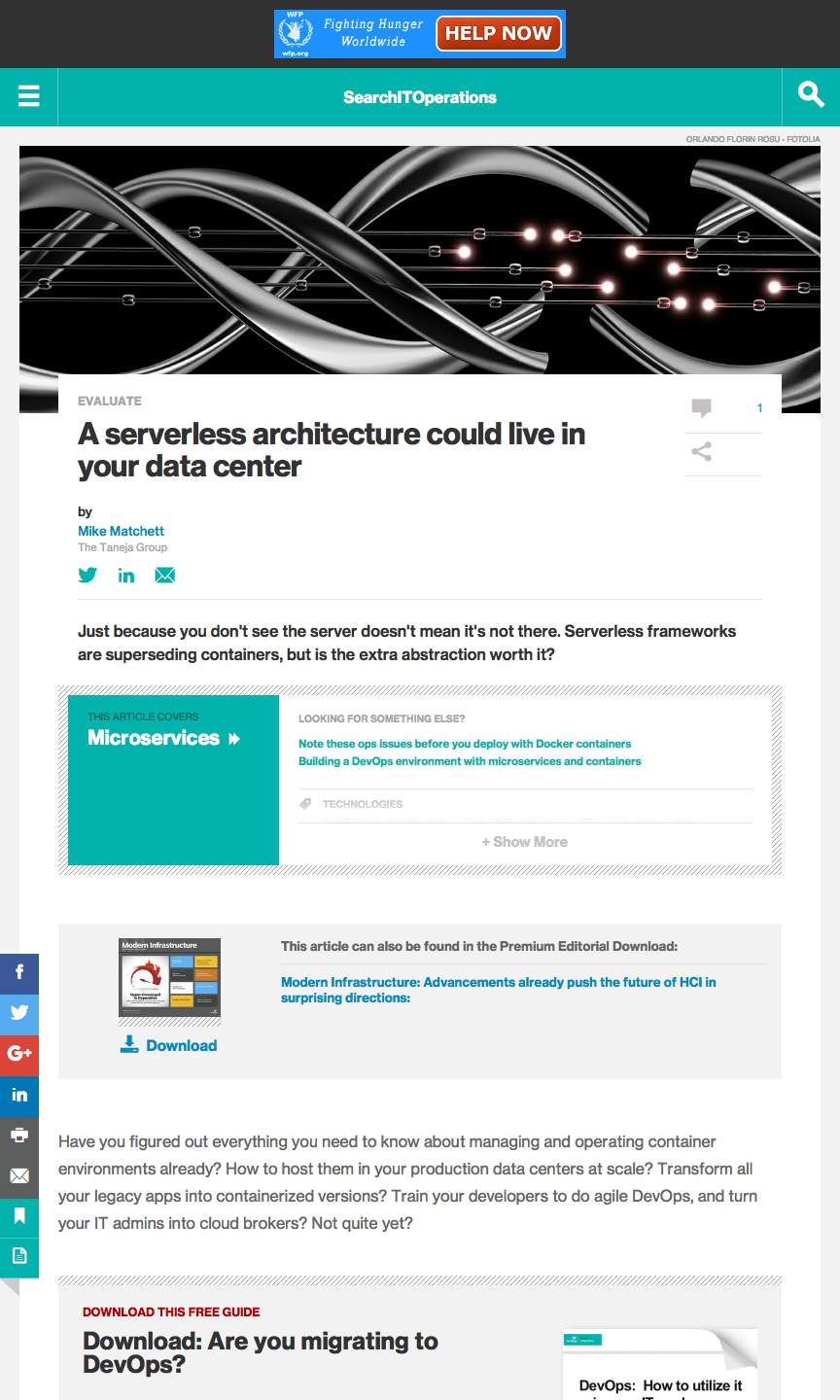 Just because you don’t see the server doesn’t mean it’s not there. Serverless frameworks are superseding containers, but is the extra abstraction worth it?

Have you figured out everything you need to know about managing and operating container environments already? How to host them in your production data centers at scale? Transform all your legacy apps into containerized versions? Train your developers to do agile DevOps, and turn your IT admins into cloud brokers? Not quite yet?

I hate to tell you, but the IT world is already moving past containers. Now you need to look at the next big thing: serverless computing.

I don’t know who thought it was a good idea to label this latest application architecture trend serverless computing. Code is useless, after all, unless it runs on a computer. There has to be a server in there somewhere. I guess the idea was to imply that when you submit application functionality for execution without caring about servers, it feels completely serverless.

So what is serverless computing? It’s a service in which a programmer can write relatively contained bits of code and then directly deploy them as standalone, function-sized microservices. You can easily set up these microservices to execute on a serverless computing framework, triggering or scheduling them by policy in response to supported events or API calls.

A serverless framework is designed to scale well with inherently stateless microservices — unlike today’s containers, which can host stateful computing as well as stateless code. You might use serverless functions to tackle applications that need highly elastic, event-driven execution or when you create a pipeline of arbitrary functionality to transform raw input into polished output. This event-pipeline concept meshes well with expected processing needs related to the internet of things. It could also prove useful with applications running in a real-time data stream.

A well-known public cloud example of serverless computing is Amazon Web Service’s Lambda. The Lambda name no doubt refers to anonymous lambda functions used extensively in functional programming. In languages such as JavaScript or Ruby, a function can be a first-class object defined as a closure of some code function within a prescribed variable scope. Some languages have actual lambda operators that a programmer can use to dynamically create new function objects at runtime (e.g., as other code executes).

So with a serverless framework, where does the actual infrastructure come into the picture? It’s still there, just under multiple layers of abstraction. Talk about software-defined computing. With this latest evolution into serverless computing, we now have perhaps several million lines of system- and platform-defining code between application code and hardware. It’s a good thing Moore’s Law hasn’t totally quit on us…(read the complete as-published article there)