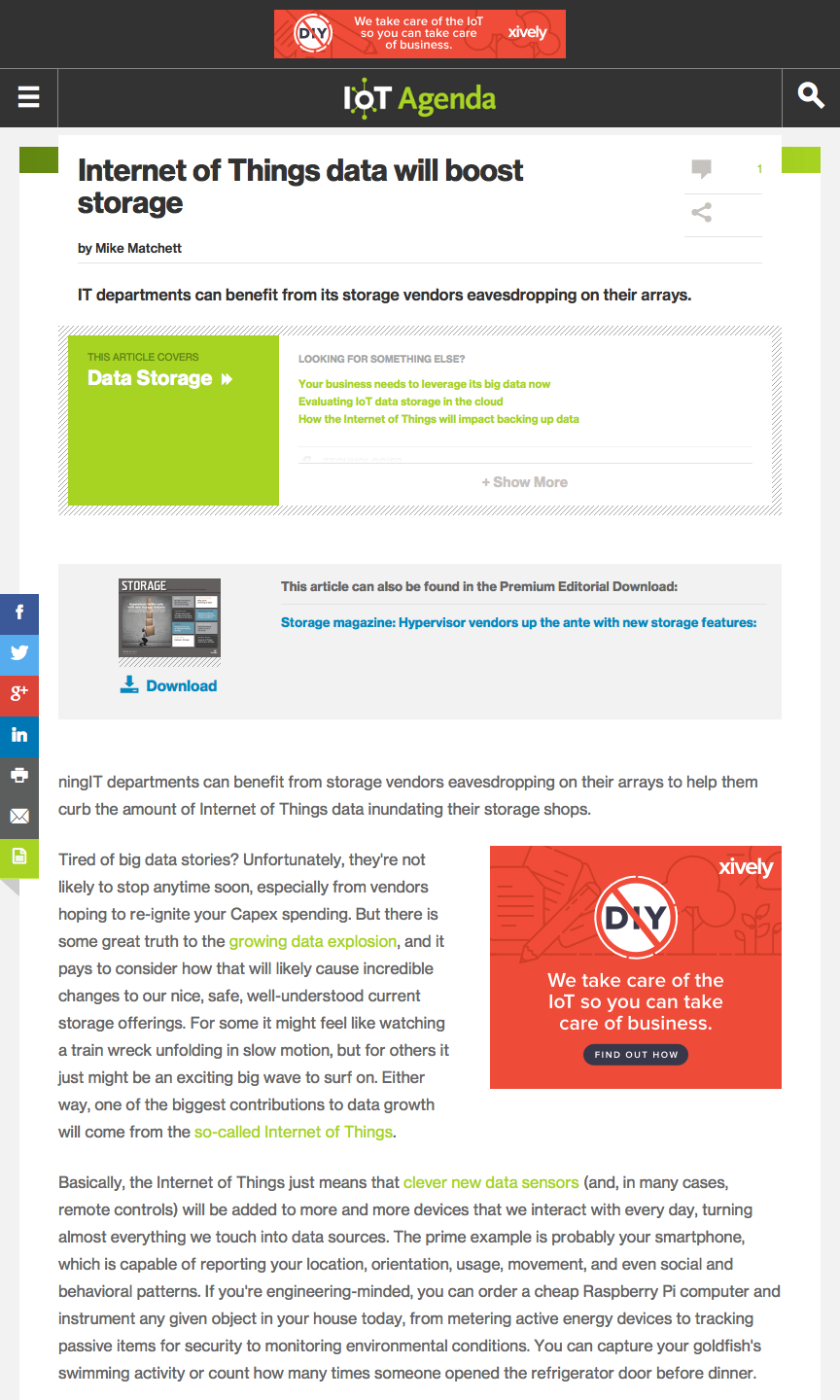 IT departments can benefit from its storage vendors eavesdropping on their arrays.

Tired of big data stories? Unfortunately, they’re not likely to stop anytime soon, especially from vendors hoping to re-ignite your Capex spending. But there is some great truth to the growing data explosion, and it pays to consider how that will likely cause incredible changes to our nice, safe, well-understood current storage offerings. For some it might feel like watching a train wreck unfolding in slow motion, but for others it just might be an exciting big wave to surf on. Either way, one of the biggest contributions to data growth will come from the so-called Internet of Things.

Basically, the Internet of Things just means that clever new data sensors (and, in many cases, remote controls) will be added to more and more devices that we interact with every day, turning almost everything we touch into data sources. The prime example is probably your smartphone, which is capable of reporting your location, orientation, usage, movement, and even social and behavioral patterns. If you’re engineering-minded, you can order a cheap Raspberry Pi computer and instrument any given object in your house today, from metering active energy devices to tracking passive items for security to monitoring environmental conditions. You can capture your goldfish’s swimming activity or count how many times someone opened the refrigerator door before dinner.

One challenge is that this highly measured world will create data at an astonishing rate, even if not all the data is or ever will be interesting or valuable. We might resist this in our own homes, but the Internet of Things trend breached the data center walls long ago. Most active IT components and devices have some built-in instrumentation and logging already, and we’ll see additional sensors added to the rest of our gear. Naturally, if there are instrumented IT components and devices, someone (probably us) will want to collect and keep the data around for eventual analysis, just in case.

Adding to the potential data overload, there’s an emerging big data science principle that says the more data history one has the better. Since we don’t necessarily know today all the questions we might want to ask of our data in the future, it’s best to retain all the detailed history perpetually. That way we always have the flexibility to answer any new questions we might ever think of, and as a bonus gain visibility over an ever-larger data set as time goes by…