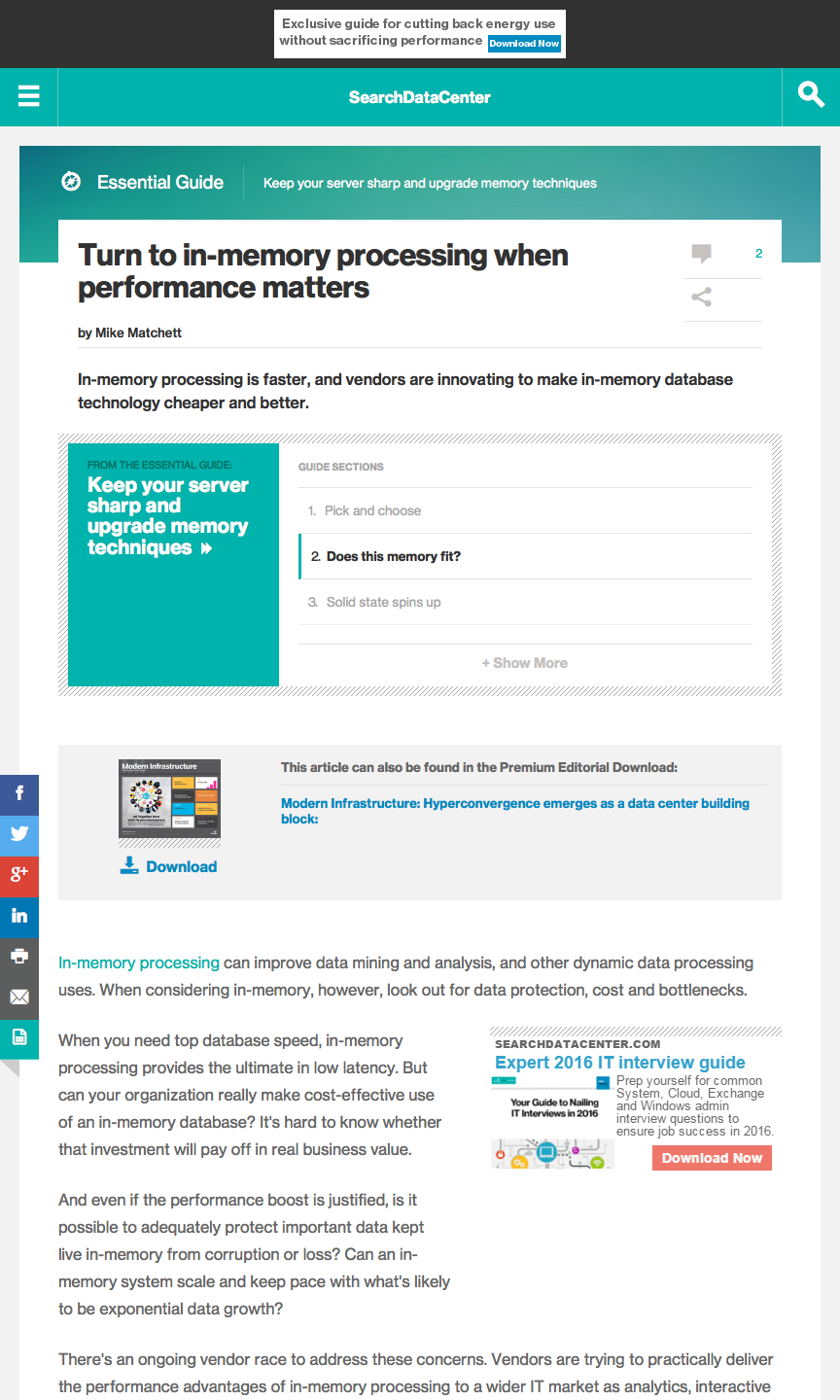 In-memory processing is faster, and vendors are innovating to make in-memory database technology cheaper and better.

In-memory processing can improve data mining and analysis, and other dynamic data processing uses. When considering in-memory, however, look out for data protection, cost and bottlenecks.When you need top database speed, in-memory processing provides the ultimate in low latency. But can your organization really make cost-effective use of an in-memory database? It’s hard to know whether that investment will pay off in real business value.

And even if the performance boost is justified, is it possible to adequately protect important data kept live in-memory from corruption or loss? Can an in-memory system scale and keep pace with what’s likely to be exponential data growth?

There’s an ongoing vendor race to address these concerns. Vendors are trying to practically deliver the performance advantages of in-memory processing to a wider IT market as analytics, interactive decision-making and other (near-) real-time use cases become more mainstream.
Memory is the fastest medium

Using memory to accelerate performance of I/O-bound applications is not a new idea; it has always been true that processing data in memory is faster (10 to 1,000 times or more) than waiting on relatively long I/O times to read and write data from slower media — flash included.

Since the early days of computing, performance-intensive products have allocated memory as data cache. Most databases were designed to internally use as much memory as possible. Some might even remember setting up RAM disks for temporary data on their home PCs back in the MS-DOS days to squeeze more speed out of bottlenecked systems.

Today’s in-memory processing takes that concept to the extreme: using active memory (dynamic RAM) to hold current running database code and active data structures, and keep the persistent database in memory. These databases forget about making any slow trips off the motherboard to talk to external media and instead optimize their data structures for memory-resident processing.

Historically, both the available memory density per server and the relatively high cost of memory were limiting factors, but today there are technologies expanding the effective application of in-memory processing to larger data sets. These include higher per-server memory architectures, inline/online deduplication and compression that use extra (and relatively cheap) CPU capacity to squeeze more data into memory, and cluster and grid tools that can scale out the total effective in-memory footprint.

Memory continues to get cheaper and denser. Laptops now come standard with more addressable memory than entire mainframes once had. Today, anyone with a credit card can cheaply rent high-memory servers from cloud providers…