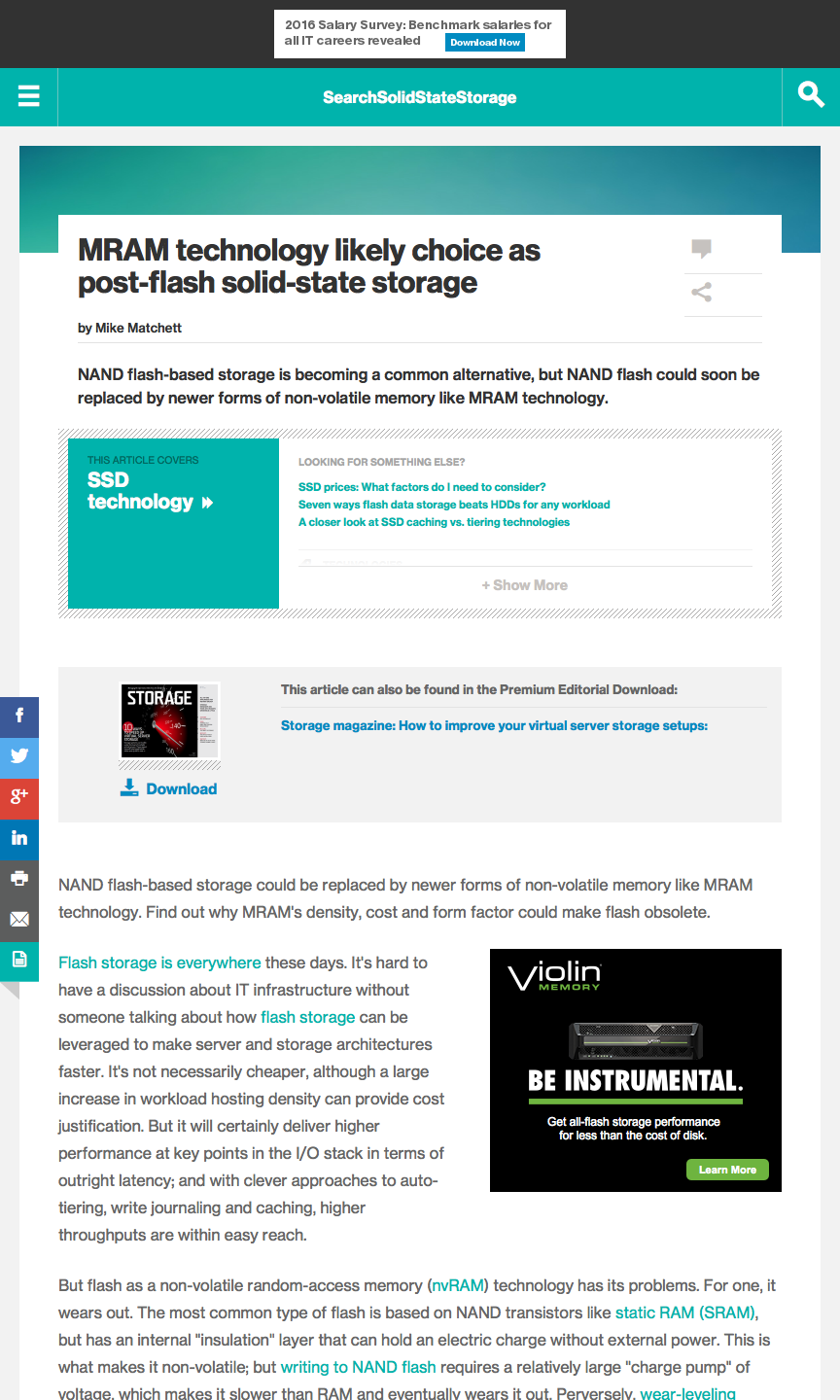 NAND flash-based storage is becoming a common alternative, but NAND flash could soon be replaced by newer forms of non-volatile memory like MRAM technology.

Flash storage is everywhere these days. It’s hard to have a discussion about IT infrastructure without someone talking about how flash storage can be leveraged to make server and storage architectures faster. It’s not necessarily cheaper, although a large increase in workload hosting density can provide cost justification. But it will certainly deliver higher performance at key points in the I/O stack in terms of outright latency; and with clever approaches to auto-tiering, write journaling and caching, higher throughputs are within easy reach.

But flash as a non-volatile random-access memory (nvRAM) technology has its problems. For one, it wears out. The most common type of flash is based on NAND transistors like static RAM (SRAM), but has an internal “insulation” layer that can hold an electric charge without external power. This is what makes it non-volatile; but writing to NAND flash requires a relatively large “charge pump” of voltage, which makes it slower than RAM and eventually wears it out. Perversely, wear-leveling algorithms designed to spread the damage evenly tend to increase overall write amplification, which in turn causes more total wear. And looking forward, because of the physics involved, flash is inherently constrained as to how much it can eventually shrink and how dense it can get.

Flash is constrained in terms of density, power and performance compared to active DRAM. This currently isn’t a problem, but as we continue to discover ways to creatively leverage flash to accelerate I/O, flash will ultimately give way to newer types of non-volatile memory that aren’t as limited. Perhaps the most promising technology today is a type of nvRAM based on magnetoresistance. Magnetoresistive random-access memory (MRAM) stores information as a magnetic orientation rather than as an electrical charge. This immediately provides a much higher read and write performance that is much closer to DRAM speeds than flash because bits are read by testing with voltage, not current, and written with a small current boost, not a huge charge. (Current DRAM latency is less than 10 nanoseconds [nsec]; MRAM is currently around 50nsec, and flash is much slower at 20 microseconds to 200 microseconds depending on read or write.)